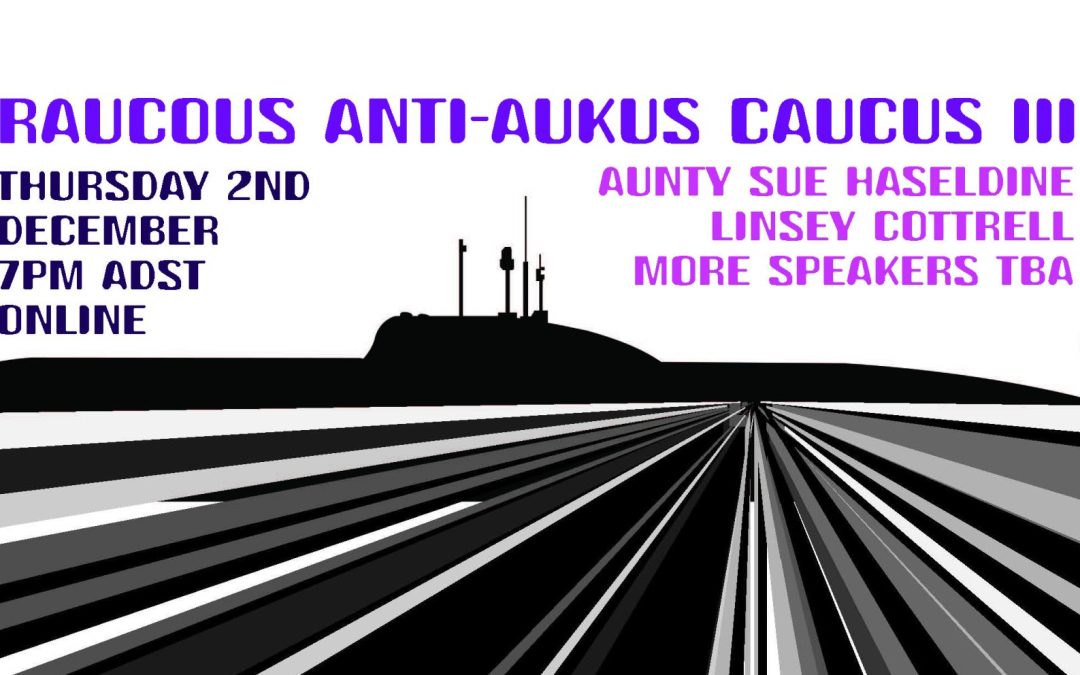 Join us for the third Raucous Anti-AUKUS Caucus on Thursday Decemeber 2nd at 7pm ADST.

Aunty Sue Haseldine – elder of the Kokatha people and the honorary co-president of the Australian Nuclear Free Alliance (ANFA).
ANFA is the First Nations led alliance that helped to build the successful campaign to stop the Jabiluka uranium mine in the Northern Territory, and more recently, the proposed national nuclear waste dumps in South Australia and Muckaty in the NT.

Linsey Cottrell – Environmental Policy Officer at the Conflict and Environment Observatory (CEOBS) – a UK-based charity working to increase the protection of people and ecosystems from the impact of armed conflicts. She is a Chartered Environmentalist and qualified as a Specialist in Land Condition.

PLuss hear updates and information of the upcoming weekend of action to “SAY NO TO AUKUS” on the 9-12 December.

Registration is free but book here to receive the zoom link prior to the event.

UPDATE: Thanks to everyone who joined us for the second Raucous Anti-AUKUS Caucus. A special thanks to those who reported back from actions in your respective states.

You can revisit the excellent talks below.

Stay tuned for Raucous Anti-AUKUS Caucus III on Thursday 2 December, 7pm ADST. More details to be announced soon, but get in touch with us via info@renegadeactivists.org, or keep watch on Facebook and Instagram.

Emma Shortis, author of Our Exceptional Friend: Australia’s Fatal Alliance with the United States, speaks about the historical trajectory of the ANZUS Treaty and the creeping logic of national security in regards to the AUKUS pact.

David Brophy, author of China Panic: Australia’s alternative to paranoia and pandering, explains how AUKUS fits into the wider Australia-China political landscape, and how it is a landmark in embedding a US-led containment policy towards China.

Jacob Grech, Renegade Activist, speaks about the military and COP26, how the military is excluded from mandatory carbon emissions reporting and how the Australian Government, through AUKUS, continues to invest in planetary destruction, rather than addressing climate collapse.

A big Thank You to everyone who attended the Raucous Anti-AUKUS Caucus this evening!

Over 250 people logged in with the common purpose of organising against this latest foray into military adventurism.

If you want to take part in our next event on 4 November drop us a line at info@renegadeactivists.org or stay in touch with our social media pages on Facebook and Instagram and coming soon…Twitter.

Videos of the speakers from the Raucous Anti-AUKUS Caucus:

Talei Mangioni on AUKUS imperialism in the Pacific

Dave Sweeney on the broader nuke implications of AUKUS

Renegade Activists is hosting a webinar panel discussion on what AUKUS means for Australia.

The panel discussion will be followed by participation in breakout rooms where attendees can organise their appropriate actions/responses.

The aim of the Raucous Caucus is twofold:
Firstly to provide information on the various aspects of this move by the Australian, British and US Governments: what it means, why its happened and the implications for Australia.
Secondly it is to provide a forum for people to meet and organise.

It is free to join, but bookings are essential through humanitix.com.

Guy Rundle is writer-at-large for Crikey. He has previously been the editor of Arena Magazine, producer of TV shows from Comedy Inc to future retro cult classic Vulture, the writer of four hit shows for the satirist Max Gillies, and the author of numerous books, including ‘A Revolution in the Making: 3D Printing, Robotics and the Future’, ‘Down to the Crossroads: On the Trail of the 2008 Election’, ‘Clivosaurus: The Politics of Clive Palmer’ and ‘Inland Empire: America at the End of the Obama Era’.

Dimity Hawkins is a PhD candidate at Swinburne University. Her thesis examines opposition to nuclear weapons testing in the Pacific. Dimity has over two decades of experience in the civil society sector working as an advocate on issues of nuclear disarmament and broader social, environmental and human rights activism. She completed a degree in Politics and Public Policy from Swinburne University with first class Honours in 2015. Dimity Hawkins was a co-founder of the  International Campaign to Abolish Nuclear Weapons.

Clinton Fernandes is Professor of International and Political Studies at the University of New South Wales in Canberra. He is the author of ‘Island off the Coast of Asia: Instruments of Statecraft in Australian Foreign Policy’ (Rowman and Littlefield, 2018)and’What Uncle Sam Wants: US Foreign Policy Objectives in Australia and Beyond’ (Palgrave, 2019).

Felicity Ruby is a PhD candidate at the University of Sydney undertaking research on surveillance and democracy. She was advisor to Scott Ludlam for his first six years in the Australian Senate. Prior to this she headed the UN Office for the Women’s International League for Peace and Freedom, and was a policy advisor at the UN Development Fund for Women at Greenpeace International.

Jacob Grech is a member of Renegade Activists, and a long term anti- militarist and arms trade activist and researcher.

Talei Mangioni is currently a PhD candidate at the School of Culture, History and Language. Talei was born and raised on Gadigal land of the Eora Nation and is of Fijian and Italian descent. Her current scholarship aims to chart the Nuclear Free and Independent Pacific (NFIP) movement across Oceania through historical ethnography, weaving archival records and material objects with oral histories of activists and artists. Exploring these stories through creative works, she engages a trans-disciplinary praxis through film-making with an interest in speculative documentary.

Dave Sweeney has been active in the uranium mining and nuclear debate for two decades through his work with the media, trade unions and environment groups on mining, resource and Indigenous issues. He works as a national nuclear campaigner for the Australian Conservation Foundation and holds a vision of a nuclear free Australia that is positive about its future and honest about its past.

Back to main AUKUS page